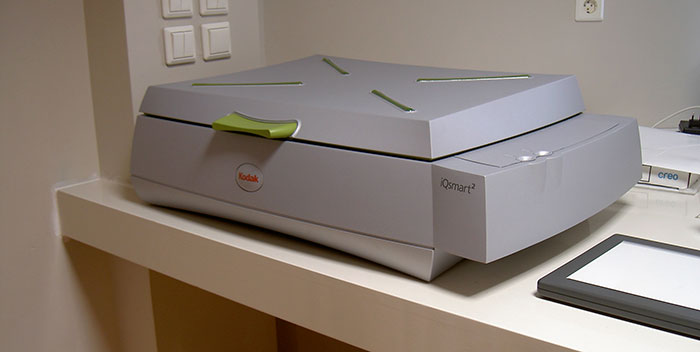 Creo IQSmart2 is one of the best professional scanners in the world. It has the ability to digitize photographs, slides, negatives, glass plates and loose prototypes, in cases there is special need for extremely high resolutions and color rendering. Hundreds of museums and photogalleries around the world use this scanner because of its exceptional quality and high productivity.

Its scanning size is A3+, and allows placement of prototypes 30.5 x 45.7cm in dimension. Its speed reaches 85 scans per hour for 6x7 slides using a magnification factor of 250% at 300dpi, in productive group mode.

The Creo IQSmart2 is one of the few scanners in the market whose quality compares directly with the quality of drum scanners. Its color depth is 16bits / channel (48bits), which attach to the picture (it does not make internal conversion from 16 to 8 bits). Noise from CCD is extremely low, and it possesses the uniqueness of it to be placed reversely, therefore achieving better cooling and preventing dust particles settling on it. Its maximum density (Dmax) is 3.9D and its tonal range is 3.7D, which are considered particularly high values.

Its optical resolution is 4300 x 8200 dpi and allows a magnification factor up to 2700%. The IQSmart2 features XY stitching which allows digitization with maximum resolution all around the “table”, in contrast with other professional scanners that achieve maximum resolution only on a thin strip at the centre of the flatbed (sweet spot). That allows high productivity, even in the case of digitization of small prototypes in high resolution, as there is the option of loading up to 72 prototypes at once. Each one of them will have its own tonal and colour adjustments, even its own magnification factor.

Creo scanners have been used for digitization by two of the biggest photogalleries around the world, Corbis Images (70,000,000 pictures) and Fratelli Alinary (3,500,000 pictures), as well as by smaller but also significant ones such as Milton H. Greece Archives, by famous photographers such as Joel Meyerowitz, museums such as National Maritime Museum of England and by large publishing corporations and graphic arts studios around the world. They have received 16 international awards for exceptional performance in the fields of professional imaging, photography and graphic arts.